The Eagle Claw Kung-Fu system from northern China. The founder of this art was a military general who lived during the Sung Dynasty. (960-1279 DC) His name was Yueh Fei. General Yueh accumulated a lot of fighting experience during the wars. After that, he created the first eagle form which includes 108 grabbing technique and taught these techniques to his subordinates.

Although Eagle Claw Kung-Fu was crated during the Sung Dynasty, it was popularized in the Ming Dynasty, (1368-1644 D.C) by a monk named Lai Chun, master of Fan Tzi system (acrobatic system) who saw the Eagle Claw’s techniques are very useful. He combined Fan Tzi and Eagle Claw into a single system. Lai Chun passed this art to a monk named Tao Chaig. Tao Chaig the taught a monk named Fai Shing. He also taught many other monks but not civilians.

Until the end of the Ching Dynasty (1644-1911 D.C), Fai Shing taught the system to a non monk named Lua Shi Tsun. Lua Shi Tsun passed it to Lau Shing Yau (the 5th generation of Eagle Claw grandmaster), taught Lau Kai Man and Chan Tsi Cheng’s who were also non monks. At this time, Eagle Claw only existed in the northern China region.

In 1929, the late great grandmaster Lau Fat Mang (student of Lau Kai Man and Chan Tsi Cheng) came to southern China and Hong Kong to teach the Eagle Claw system. On the 17th of March 1964, Lau Fat Mang died in Hong Kong. His eldest daughter Lily Lau inherited the legacy from him which earned her the honor of becoming the 8th generation grandmaster. 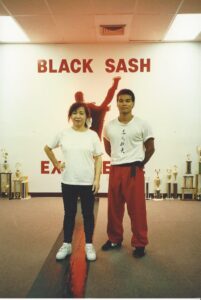